Why is no one ‘teaching’ Java if it is the most in-demand programming language by employers? 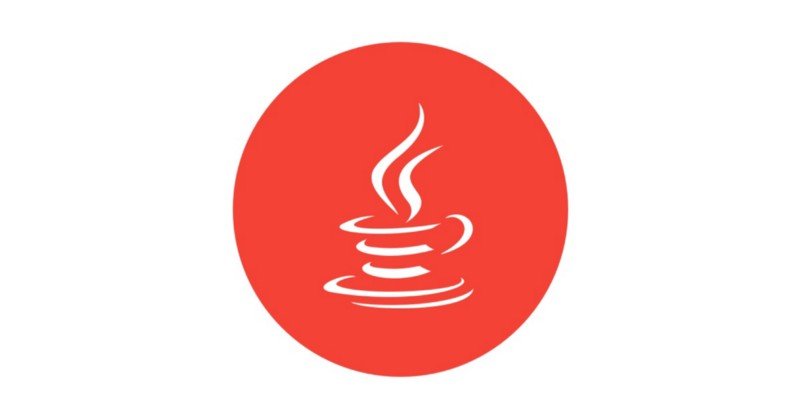 When trying to decide which is the right coding bootcamp for you, it’s important to look into the programming languages the web development courses cover. With so many programming languages out there, this can vary quite a bit . You want to make sure you’re investing your time and money into something worthwhile. Coding bootcamp names usually have terms like Ruby on Rails, Python, Java, JavaScript. So when trying to choose one, you have to face  the task of investigating each of them and deciding which one you should learn.

After all, we’re going to assume that your main objective in learning how to code is to get a job as a programmer. Are we right?

Though there are many ways to compare programming languages, we believe examining the demand for such languages by employers is the smartest and most logical way to decide which to learn as it keeps your main objective at the forefront of your learning.

So which is both popular amongst developers and employers?

TIOBE is a great indicator of the best language to learn. It calculates its classification by analysing data from Google, Yahoo !, Bing, Wikipedia, Amazon, Baidu, and YouTube. Then it combines variables such as the number of professional developers around the world, training courses, and third-party data to determine positions. 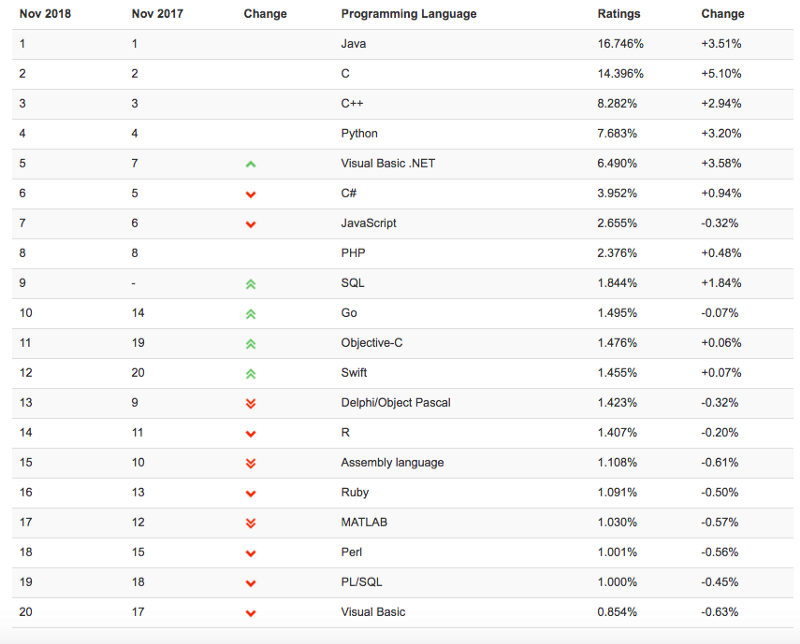 If we take a look at HackerRank’s detailed 2018 Developer Skills Report, we can see that JavaScript and Java tie for the most in-demand programming languages by employers: 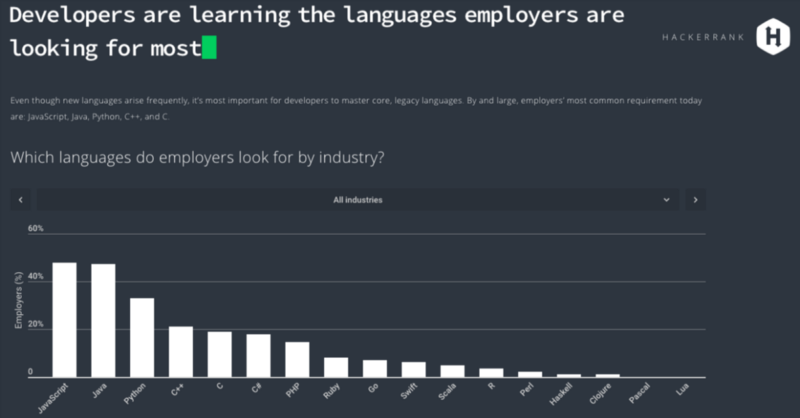 “It’s evident that both Java and JavaScript are nearly identical in terms of usage across development teams either already using or planning to use cloud-native architecture,” says Cloud Foundry Foundation CTO, Chip Childers in the2018 Developer Language Report. “The data shows these two languages are the preferred choices for companies developing cloud-native applications.”

The difference between Java and JavaScript is that the first is a back-end language. The latter is used in front-end development (though Node.js, a JavaScript runtime, can be used on the back-end). Finding a programmer who knows JavaScript is much easier than one who knows Java.

Infojobs.es highlights the existing skills gap in their annual report, stating that

Java developers are the hardest to come by.

If we take a deeper look, we see that for every open Java developer vacancy in Spain (and there are a lot), there are just four registered applicants, thus making it one of the most in-demand profiles.

If you do a job search on Indeed for programmers and developers in the cities we have coding bootcamps, you can see that Java is the most in-demand back-end programming language by far. It makes up an average of 67.24% of the open positions for Barcelona, Amsterdam, Berlin, and Madrid. 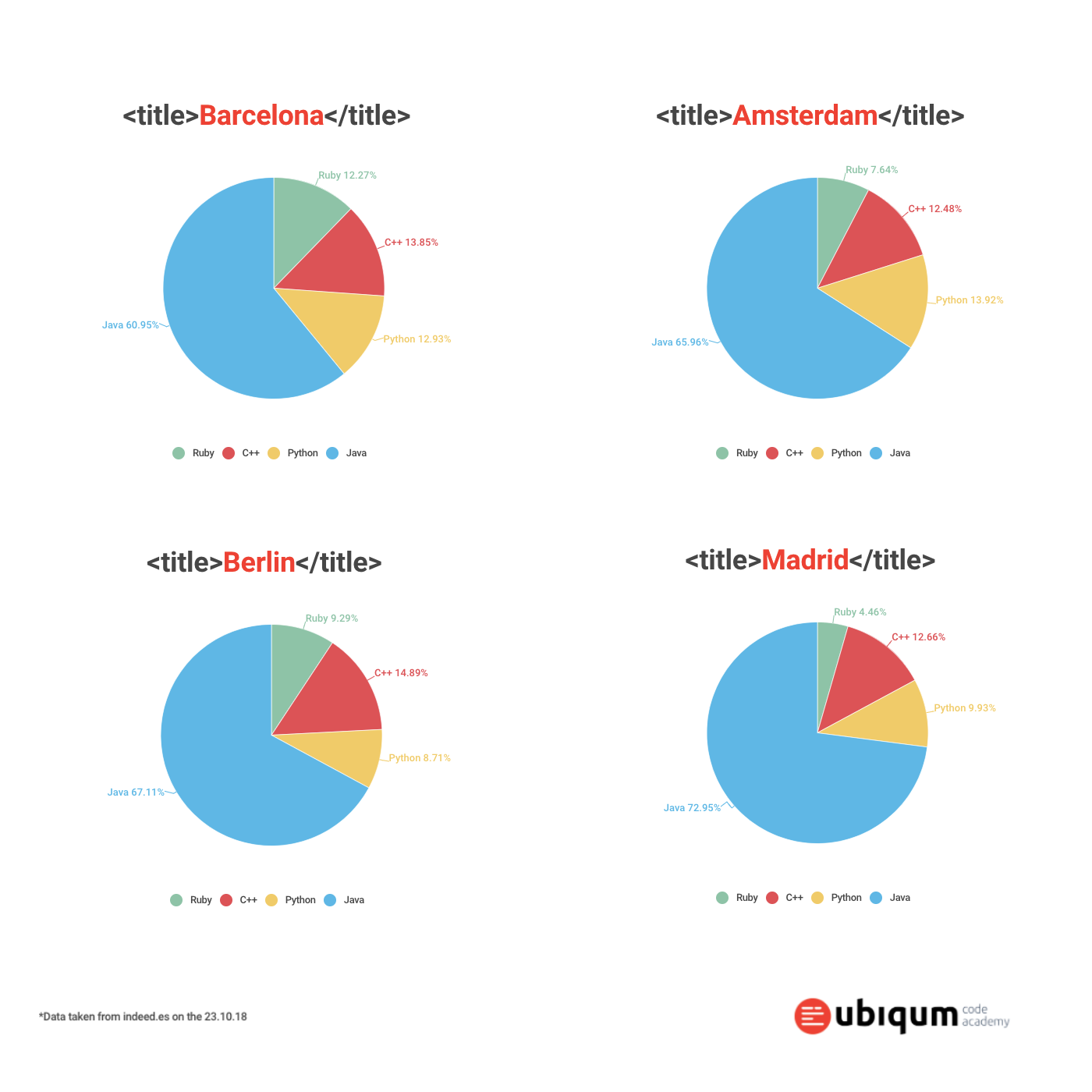 So why are we the only coding bootcamp offering courses in Java?

If you take a look on SwitchUp, you’ll see that Ubiqum Code Academy is the only coding bootcamp operating in Barcelona, Berlin, Amsterdam, and Madrid to offer immersive 5-month-long web development courses in Java. However, with so many more open vacancies for this highly popular programming language, one would imagine all coding bootcamps to be offering it. So why aren’t they?

Java is a complex language to teach and not something you can do in five, nine, or even twelve weeks. The fact that our Web Development with Java course spans over five intensive months means that students are able to gradually build upon their knowledge. They accomplish so by constantly putting into practice everything they learn. Our Career Programs are for absolute beginners. So rushing through “the basics” and not giving students enough time to feel fully confident using technologies such as HTML, CSS, and JavaScript, i.e. the foundation for learning Java, would be a big mistake. After all, you don’t build a house without making sure you’re on solid ground first.

“When I saw that Java was just the last two months, I wondered if this would be enough. But having completed the previous modules in HTML, CSS, and JavaScript, I realise now how necessary these steps are.” — Grigory Zabelin

You can’t ‘teach’ Java, but you can learn it.

The way in which you learn is key. Being told how to do something through lectures or theory-heavy teaching materials is not the way in which we should be learning. Students quickly forget the content and materials they studied in class. A practical, ‘learn by doing’ methodology such as our own, on the other hand, is conducive to deep, long-lasting learning and equips the learner with the skills to continue learning in an autonomous, proficient way.

At many coding academies, students code, yes. But only after a lectures well structured according to a predefined syllabus. Not at Ubiqum. Our program is centered 100% in our students. This means that students are able to progress through the content at their own pace. They can refactor their code until it meets the acceptance criteria. It may take longer for some students than others. But our programs are designed to adapt to a variety of skills and abilities with one common trait. What all of our students have in common is that they want to depart the program with the core skills of a modern developer.

Being a modern developer means knowing how to program in Java. But it also means possessing the mental models to face and overcome complex problems. And by mental models we mean the thinking tools that you use to understand life, make decisions, and solve problems. We designed our Java Program according to learning science criteria. It is so much more than a course in web development or simply learning how to code. Many of our students have found the experience to be life-changing.

“I came to the academy with not even a beginner’s level in IT. But after completing the Web Development with Java Program at Ubiqum, and experiencing their Learn by Doing methodology, not only have I expanded my programming knowledge, my way of thinking and problem-solving in life has completely transformed. Now I have access to a very different mental model. I will never regret taking this course and becoming a part of Ubiqum.” — Mohammed Najjar