Disruptive Technology and Automation: 10 jobs that are at risk 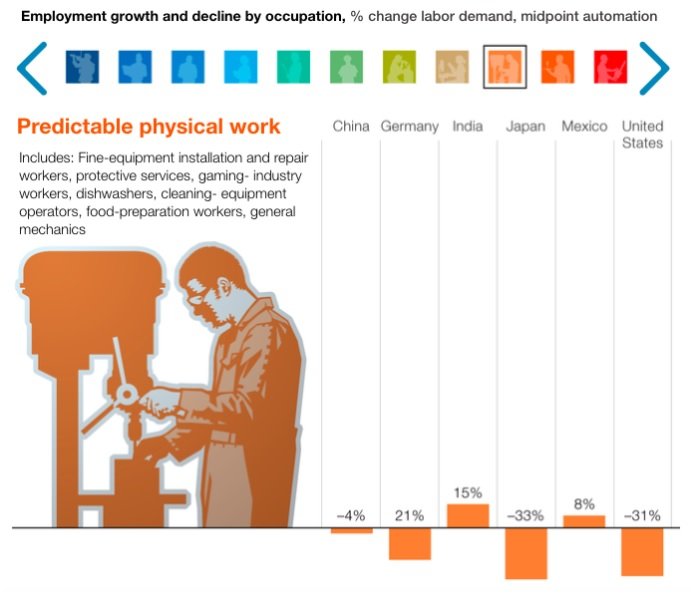 How and why disruptive technology is affecting the job market? For years, the dark premonitions of what the future has in store for us have seemed to be just popular beliefs extracted from futuristic films. However, with the arrival of self-driving vehicles, the ability to predict human behaviour with deep learning (a branch of artificial intelligence), and Amazon’s drone carriers, these technological advances are already here and quickly becoming a normal part of our everyday lives. Artificial intelligence (AI), disruptive technology, virtual reality (VR), and robotics are creating a new technological wave, forcing us all to analyse the potential effects and adapt accordingly. While many jobs are already being automated and therefore at risk of becoming obsolete, many new positions are also being created, like web developer in different areas.

The effects of disruptive technology

“Automation technologies including artificial intelligence and robotics will generate significant benefits for users, businesses, and economies, lifting productivity and economic growth. The extent to which these technologies displace workers will depend on the pace of their development and adoption, economic growth, and growth in demand for work. Even as it causes declines in some occupations, automation will change many more — 60 percent of occupations have at least 30 percent of constituent work activities that could be automated. It will also create new occupations that do not exist today, much as technologies of the past have done.”

The report shows that the manufacturing and agricultural industries are seeing the greatest large-scale sector employment declines. 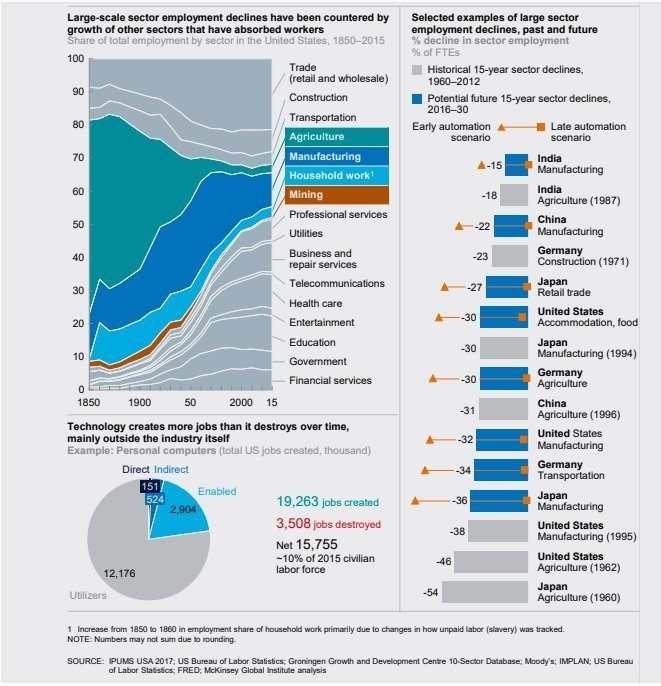 Also noting a sharp decrease in the need for manual labour workers such as mechanics, factory workers, repair workers, and cleaners:

Based on the information taken from this report and that generated by the US Bureau of Labor Statistics, we bring you a list of jobs that this technological progress endangeres.

This are the top 10 jobs that are at risk of becoming obsolete due to automation and the use of disruptive technology:

Jobs in the agricultural world are being drastically affected. Machines such as self-driving tractors and harvesters are removing the need for workers. With this implementation is making many people have to retrain and look elsewhere for work.

Financial advisory jobs are also becoming automated. Finance companies such as SigFig and WealthFront are two examples of companies that are progressively automating their advisors.

Medical prescription workers are being affected by AI? Surprisingly yes. A UCSF Medical facility is currently using robotics to track medication prescriptions. To date, these machines have made zero mistakes.

Today, anyone from anywhere can essentially order something online and get that service or product delivered the same day. This accessibility to products is making door to door sales a thing of the past.

When thinking about the effect disruptive technologies will have on jobs, those who work with machinery usually come to mind. And it’s true. Machinery is taking over the factory industry as equipment assemblers and production line workers are quickly being replaced by their more efficient robotic counterparts.

Bankers may soon be a thing of the past. Today, an ATM is capable of doing 90% of a banker’s job and with the digital revolution not slowing down anytime soon, this number could quickly rise to 100%.

If you are banking on continuously making money as an Uber driver over the next few years, don’t! With Uber, Waymo, and Tesla making huge leaps in perfecting the self-driving car, a driver within the transportation industry will soon find it very difficult to find a job.

Booking a trip anywhere around the world is now easier than ever! Convenient apps such as Kayak, Expedia, Booking.com, and Airbnb have taken over the travel industry, thus removing the middle man from the equation.

Yes, disruptive technology and automation is set to make certain jobs obsolete, but it isn’t all bad. As automation and AI lift productivity and economic growth, many new jobs will be created. So what does this mean for you? If you are one of the many people whose job is at risk, you’ll need to consider retraining or upskilling.

As we can’t ignore the digital revolution, we must take advantage of the tools it offers and begin to explore the new technological careers that are in such high demand.

Technology creates more jobs than it destroys over time, the key is having the skills to access these jobs.