Anyone can learn to program and become a web developer

Almost everyone has thought about making a career change at one point or another, but not that many actually go through with it. Whether it is a lack of motivation, passion, or career prospects, we’re here to tell you that changing careers is possible!

Is it scary? Yes. Does it feel like leaping off a cliff? Sometimes. Is it worth it? Most definitely.

If you’ve made a career for yourself, you’ve no doubt invested a lot of time, money, and effort into getting where you are. Therefore, starting again from scratch might feel more than slightly overwhelming.

At Ubiqum Code Academy, we’ve had hundreds of students who’ve left their previous jobs in order to pursue a career in tech.

So what makes tech so special?

Aside from the amazing career prospects web development offers, the fact that the field of IT and tech is so accessible makes it a great option for people of all backgrounds. With the emergence of coding bootcamps like ours, absolute beginners can learn to program and launch their career in tech in just five months.

But don’t just take our word for it, check out some these inspiring stories from Ubiqum alumni. 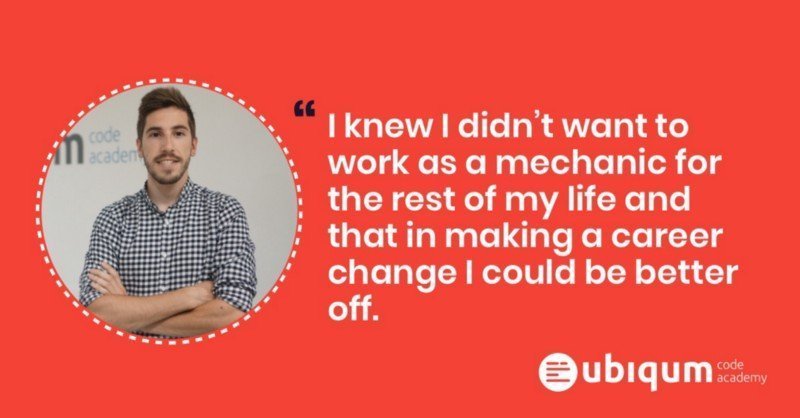 Rubén’s story is pretty amazing. He went from working in a garage as a mechanic to launching his career in web development. One of the first people to do the Web Development with Java program back in 2016, Rubén had many concerns about making the change. After all, his professional background was in something totally unrelated.

“I actually wasn’t sure that I’d be able to finish the program or that I’d be able to get my head around it all. But once you complete the first project, which is to create your first website, you feel quite proud and impressed by what you’ve achieved in such a short space of time.”

Rubén finished the program, learned to code and landed a job as a full-stack developer at Spaceboost (formerly RockeRoi) within just one month.

Since then, Rubén has gone from strength to strength, developing his skills and gaining experience from top companies such as T-Systems.

Rubén’s advice to those looking to make a career change:

“It’s not easy. It’s a pretty radical change, at least it was for me, and it’s difficult to accept that all that you’ve done until now, all that you’ve studied, all the training and years you’ve invested, won’t be relevant. Like many people, I also had the economic pressure of having to support myself for 5 months whilst on the course and I had no idea if I’d even be able to find a job afterwards. But I managed it and it didn’t take me long to find a job.

In the IT and tech sector, there is always work and there are always opportunities to advance professionally. You’re never going to find yourself stagnant. The only way is up, economically and professionally.”

Ruth Gascon is a great example of a successful career changer. Previously working in audiovisual communication, she found herself uninterested in the jobs available to her and unmotivated by the salaries attached to them. When she realized she needed to change careers, she was excited by the prospect of getting into web development and learning to program. But, of course, she had her concerns:

“I had this idea that if programming is not something you’ve been doing since you were a child, you’re not going to be able to do it. I had also looked at some programming languages before and done a few courses but it seemed impossible to learn how to code and I gave up before completing the courses. It wasn’t until I came to Ubiqum that I realized that anyone, at any age can learn how to program and become a Web Developer, with Java no less.”

What’s so inspiring about Ruth’s story is that, in learning to code, she found something she was really passionate about — something she hadn’t felt since leaving university.

Ruth’s advice to those looking to make a career change: “Do it! But be patient.”

“Programming is a great skill to have as the type of opportunities available to you are so much cooler than in most other sectors.”

Feeling completely stagnant as a customer service representative, Jordi decided it was time to change to a more rewarding career. After talking it through with a programmer friend, learning to code and launching a career as a developer seemed like a great option. However, Jordi didn’t only have himself to think of. Dad of three, the decision to quit his job and start a web development course was not taken lightly. However, five months after taking our Java Development program, Jordi landed his first job as a back-end developer for Seidor and was over the moon!

Jordi’s advice to those looking to make a career change:

“Do it! I’m going to be working on something that I love, with a much higher salary — what more could I ask for? In my previous job, I was completely stagnant as there were no opportunities for professional or economic growth. As a developer, on the other hand, the only way is up. I know that professionally as much as personally, I’m going to grow, and that’s very exciting! Doing the Java Development course is the best investment you can make. Before starting, I read that 98% of students find a job within two months of completing the course, now I can see that that’s totally true, and I’m one of them! In fact, the great majority of my group were hired even before the end of the course.” 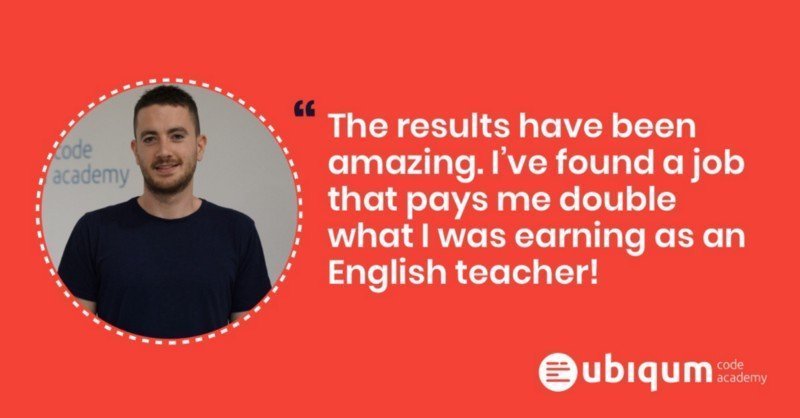 Andy moved to Barcelona from the UK and started a job as an English teacher. However, he soon tired of the monotony of giving classes and earning a poor wage. Inspired by working with developers in a previous role, he did some research and found Ubiqum Code Academy. Of course, he had a lot of “what-ifs” and the added pressure of having to support himself throughout the course. What’s great about Andy’s story is that his expectations were exceeded. He wanted to find a job that would pay him what he deserved and found one that pays double what he was earning as an English teacher, so he just had to learn to program!

Andy’s advice to those looking to make a career change:

“If you could see how far I’ve come in the past five months it’s really crazy. I’ve made this huge career change and can now see a bright future ahead. I would definitely recommend it!”

You can do it too!

These are just some of the hundreds of students who have launched their new careers in web development with the help of Ubiqum. Though we’ve just featured four here, you can take a look at all of our student stories on our website and find people from all backgrounds and ages.

So, what did all these people have in common before studying Web Development with Java?

Little or no previous coding experience and a desire to change careers.

What do they all have in common now?

A rewarding, fulfilling career that they can thrive in!

Looking for career advice or want to find out more about our coding bootcamps? Get in touch below.